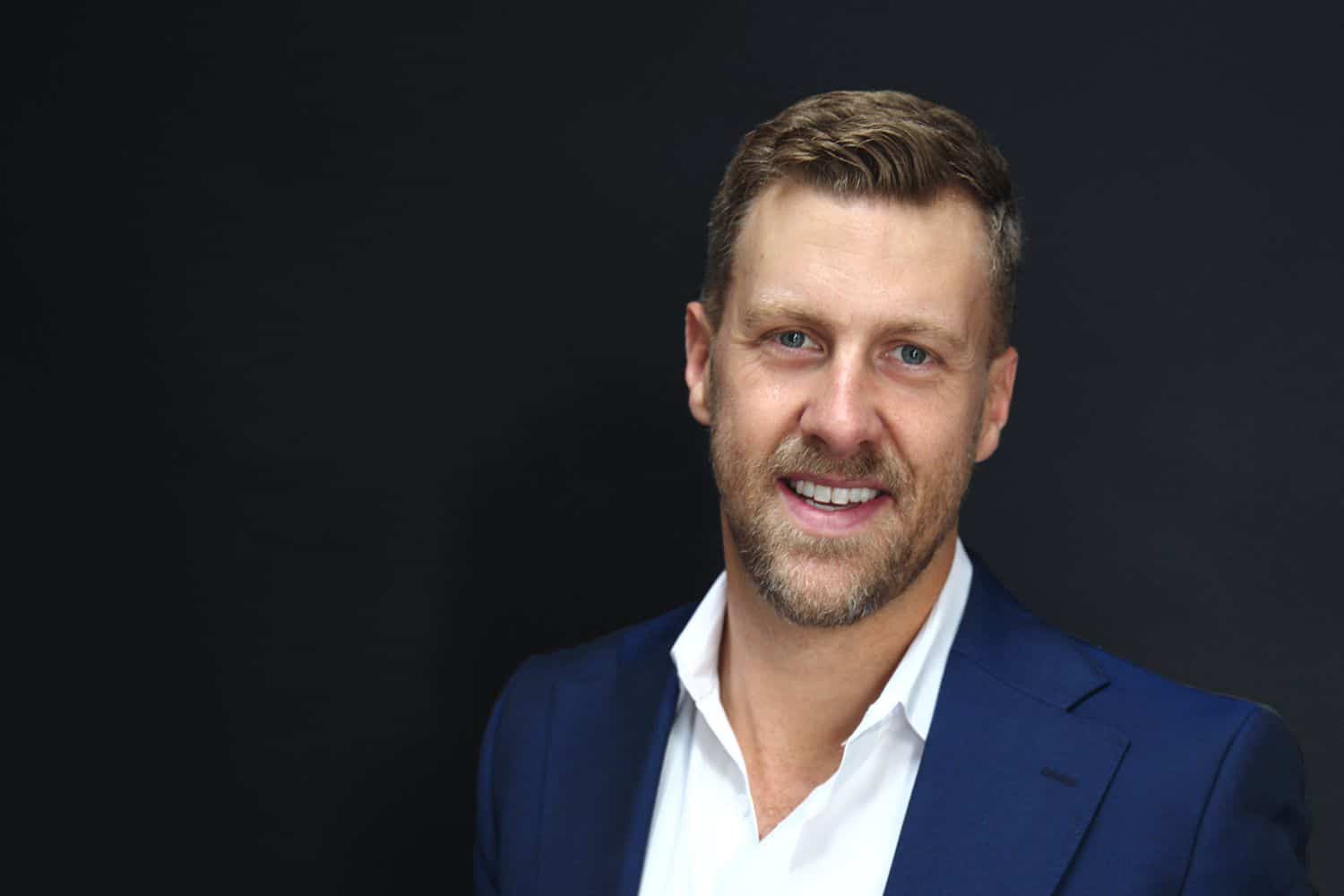 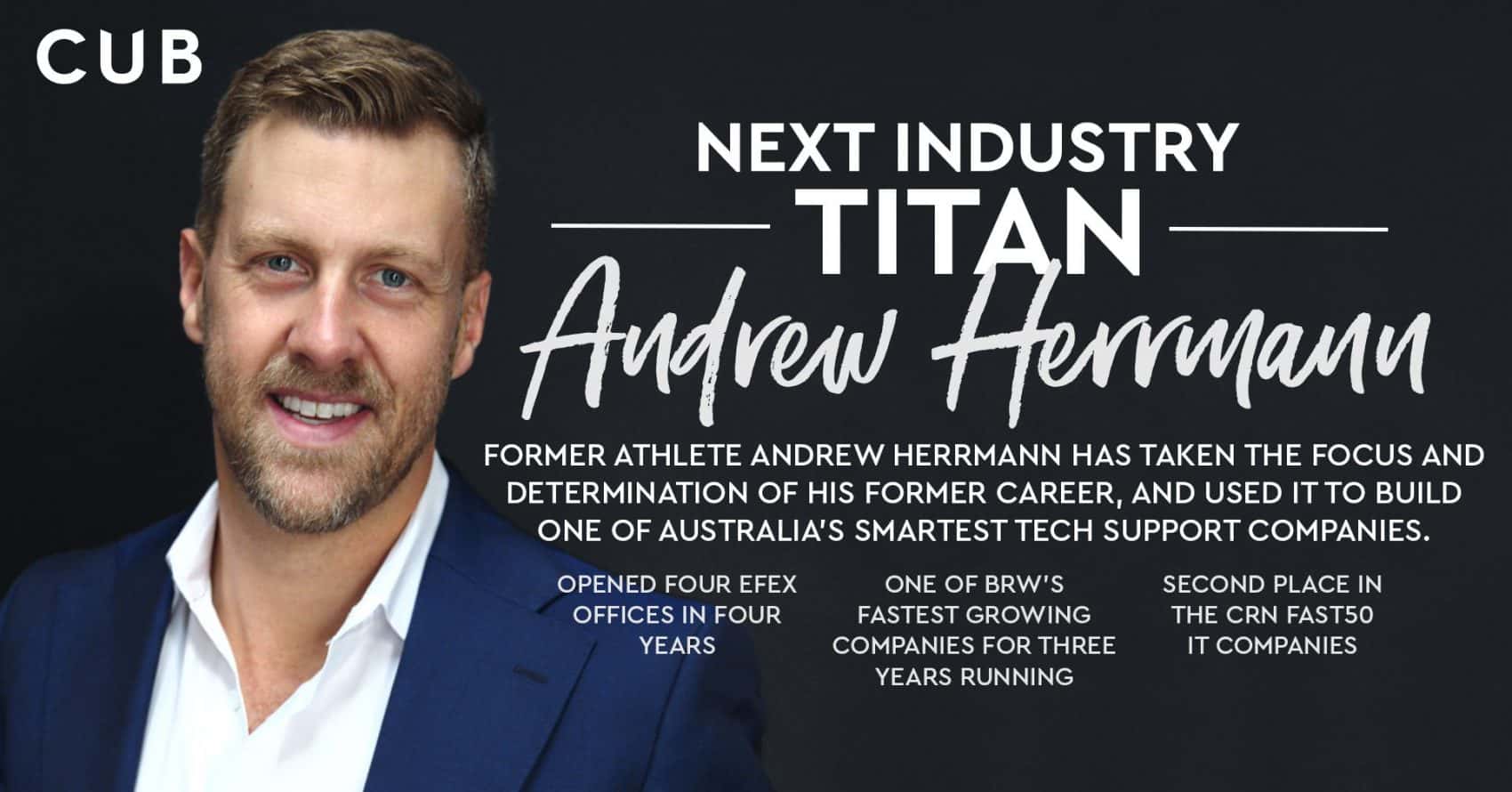 Business and sport have a lot in common. The long hours of training and preparation, the competition, the intense wins, the even more intense losses. Early mornings. Late nights. Business, like sport, isn’t for the faint hearted – but for those who love it, it’s a lifelong passion.

Andrew Herrmann knows this better than most. He has dedicated equal parts of his life to both sport and to business, and as director of national tech company EFEX, reckons it was his time as an athlete that lay down the foundations for his success later in life.

EFEX Group is an Australian company that specializes in technology solutions for corporate workspaces. Founded in late 2013, they work in the print, IT, networking, cloud, voice, and data solutions space to streamline how companies work, and in a more cost effective manner. Simply put, EFEX work with companies to ensure their tech is achieving all it can be, at the best possible price. It sounds simple, but for many of us office technology is a tangle of hastily signed accounts, ageing equipment, and cords to nowhere.

Today, EFEX sits at the forefront of leading business technology solutions. But for Andrew and business partner Nick Sheehan, it all begun with the humble printer.

“When we started out, we were working mostly with printers and photocopiers,” says Andrew. “We would supply, service, and upgrade the machinery.”

As paperless offices begun to rise in popularity it became apparent that EFEX needed to adapt and evolve in order to survive. It was at this point that Andrew and Nick decided to expand their offering to include the service and support of other office technology.

Speaking with Andrew, it slowly dawns upon you why this relatively straightforward business concept has grown with such intensity in the last four years. There is, effectively, no limits to their model’s growth – as long as technology continues to evolve and offices become more and more automated, EFEX will be running a booming business.

‘Booming’ sounds about right. EFEX have appeared in BRW’s fastest growing companies for three years running, whilst their revenue has doubled and tripled year on year. They have offices in Melbourne, Sydney, Brisbane, and Adelaide; and were voted Australia’s second fastest growing IT service business in 2016.

It’s tempting to put the EFEX growth down to luck, a fluke, the right-place-right-time kind of success. But, like most big businesses, it was quite the opposite: it took years of hard work and finessing to get their formula right.

“Nick and I are born and bred salespeople, so we were particular about what we wanted in a sales team,” says Andrew. “We had to build the business from the ground up…..salespeople can be lazy, so we needed to build a team that were as hungry for success as we were.”

They went straight to the source. The decided to exclusively recruit young adults, straight out of school, who were ready to work hard and unspoiled by the bad habits of older salespeople. As Andrew says, younger people seem to have ‘less fear, no preconception of what work should hold.’ It’s an age where people want to prove themselves and learn how the world works. This was, after all the age that Andrew was when he first got his start, and it fared well for him.

Unlike the young men and women he has taken on with EFEX, however, Andrew had a few years of hard work before he started his career. Andrew, you see, was an athlete in another life.

“I guess you could say I started out in motorsports at the age of seven,” says Andrew. “I was riding go-carts, then swimming, and then moved into triathlons. At around age 14 I was spotted by a scout who asked if I had tried cycling before.”

Andrew’s talent for cycling was apparent from the very start. Working with a trainer, he would spend the next seven years of his life dedicated to the sport, travelling internationally for competitions and training with the NSW Institute of Sport. He was destined for the big time.

I ask Andrew if there was ever a moment during his sporting career that he felt it was a short-lived adventure, or if he truly believed that this was to be a lifelong commitment.

“There was always a feeling in the back of my mind that I was going to do well in business,” says Andrew. “I loved cycling, and I was doing extremely well. But I could still see that it was a small window to work within – only about 5% of professional cyclists can live off their earnings.”

And so it was with little fuss or fanfare than Andrew quietly exited the sport, and moved into business instead. No experience in life is ever wasted, they say, and the lessons he learnt from his years in sport carried over into his burgeoning career as a business owner.

“I will always be thankful for the lessons I learnt,” says Andrew. “I love competitiveness and I hate losing – but I still know that regardless you need to put in the effort beforehand. I find that in the sales world, winning business is a lot like a sporting event. There’s months of training and preparation beforehand, and then that amazing euphoria of a win.”

In his early years as a salesman working in real estate, Andrew realised how much the structure and perseverance he was taught in his sporting years helped him survive. It was about relentlessly going after ‘the big win’, surviving setbacks, and remaining focused. In the early days of EFEX, however these skills were really put to the test – with no incoming enquiries, it was up to Andrew and his team to source all of their new clients.

“When we started, nobody knew who we were – nobody had heard of us,” says Andrew. “We were selling against the big guys. And now it’s quite interesting because we ourselves are becoming ‘big guys’!”

Like sport, growing a business idea requires a strong plan. In their line of work, the team at EFEX need to constantly be solutions-focused, finding new ways to solve old problems. Andrew in particular seems to have a natural love of problem solving, something that he says has always been a passion of his. And problem solving is at the core of what EFEX offer – an honest appraisal of how their technology can start really working for a client’s business.

“Most people don’t know how much they’re spending,” says Andrew. “It’s scary for them to realize how much money is going out to purchase items, for example, when they could be leasing. The cool thing for us is to go in, audit, analyse, and create a solution.”

It is rare to find such earnestness and passion for helping others in the revenue-driven corporate world. But Andrew truly has a passion for helping people achieve their best business possible. With the same calm demeanour of a professional sportsman in the moments before a race, Andrew doesn’t falter when I ask him what’s next for himself, and for EFEX.

“The future is bright for us,” he says. “As long as people have technology, we’ll be there to help.”