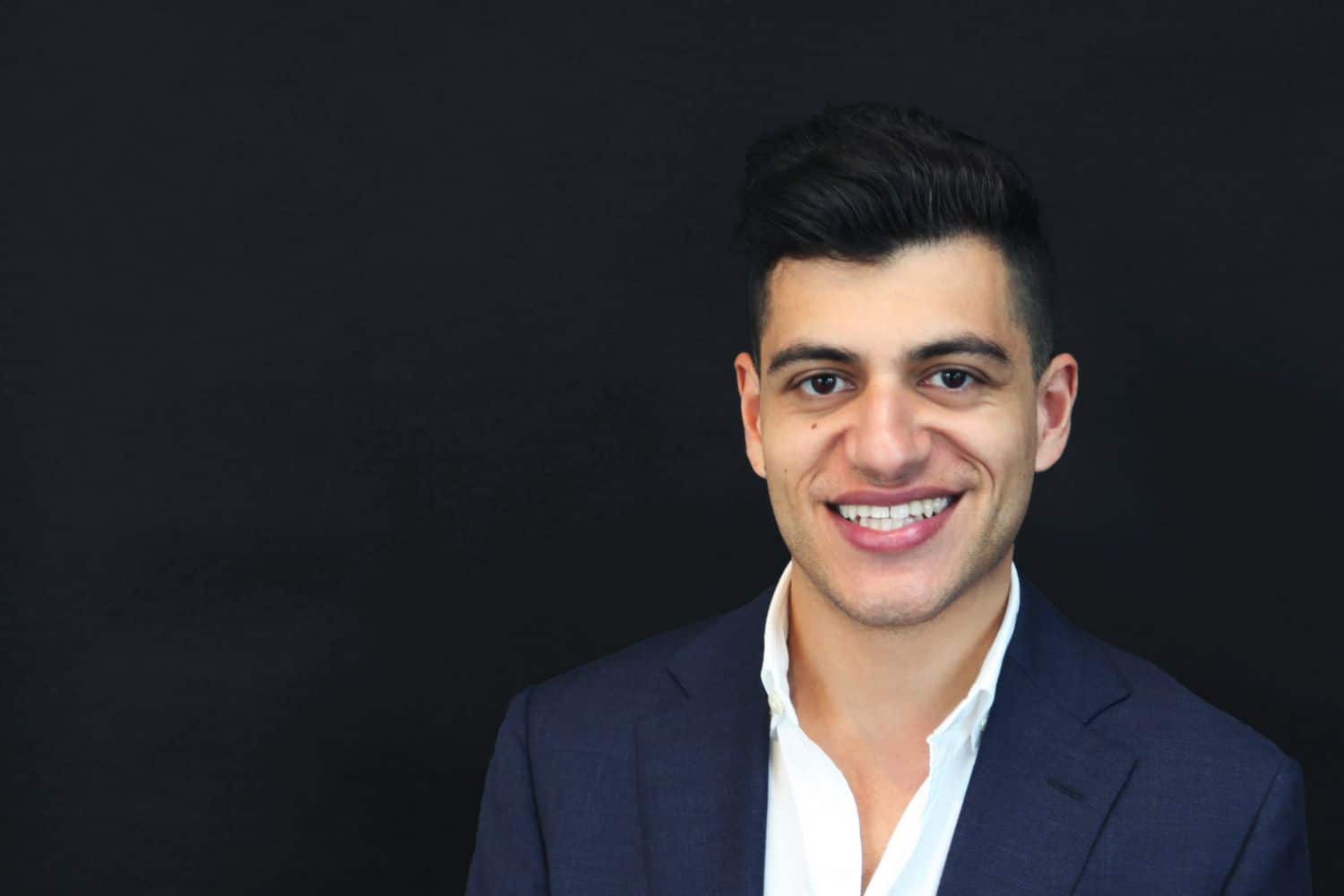 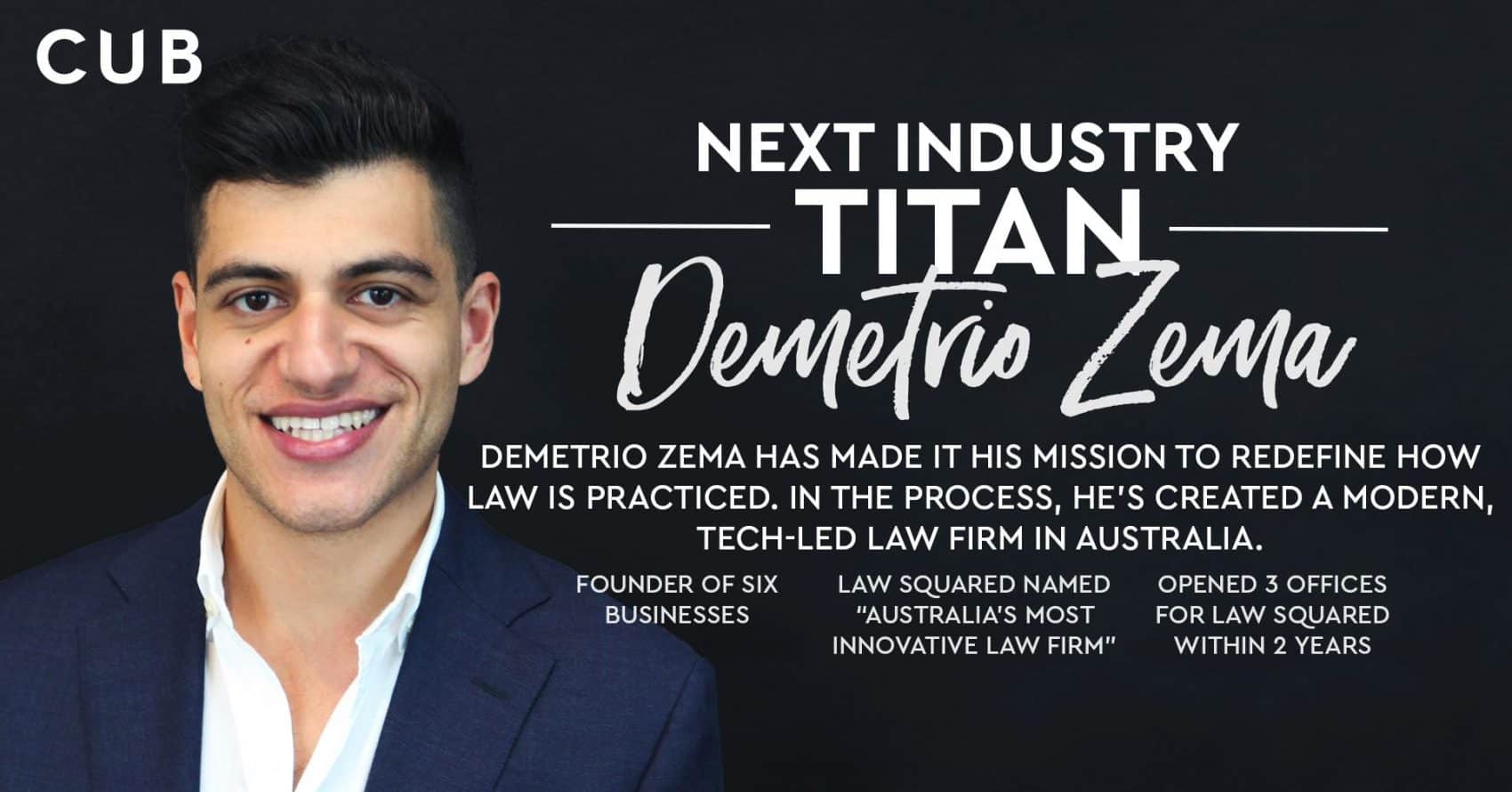 Law has always been shrouded in a sense of mystery.

Lawyers do not invite their client behind the scenes, or try to explain how things work. They’re not about streamlining clunky processes, or modernising the language, or simplifying the systems. Law is an ancient trade that takes years to learn, and decades to master. It is expensive, mysterious, and hidden behind centuries of academia and prestige.

Demetrio Zema is on a mission to fix that.

At just 30, Demetrio is spearheading a new type of law practice that is all about updating traditional processes with modern thinking and the latest in technology. He’s recalibrating the current systems with a new breed of lawyers, in a new type of legal practice. It’s called Law Squared, and it’s been dubbed “Australia’s most innovative law firm”.

Demetrio founded Law Squared in March of 2016 after spending six years as a commercial insurance litigator. He was disenchanted with his industry. There was a growing gap, he felt, between the way law was being practiced, and the way the younger generations were needing it to be practiced.

“The ‘old law’ systems were not keeping up, or managing client expectations,” says Demetrio. “I could see that there was an opportunity in the market.”

So, he left his role as a solicitor and took the leap to establish his own business.

Law Squared works mostly with entrepreneurs and high growth individuals. Demetrio has shifted the entire system to keep up with how all businesses are run – and his clients like it. Gone is the traditional partner/ equity model used by all legal firms around Australia, replaced instead with a standard business model. There’s the director (Demetrio) and his 18 employees, with no hierarchy and certainly no partnership politics. Gone are the billable hours and mysterious fee structures, replaced instead with upfront quotes and transparent billing systems.

“For me, traditional legal firms seemed to be about money, not outcomes,” says Demetrio. “We were being commodified by billable hours and how much we were earning, not about the results – which means you end up thinking about hitting numbers, not thinking about what the client needs.”

Streamlining, modernising, simplifying. Like so many other industries are quickly realising, survival is about keeping up with a personalised and transparent client offering. People don’t want to fill in a new form every time they need something actioned from their lawyer. They don’t want a pile of papers sitting on their desk, or bills that come with a randomised figure that was never discussed or negotiated. They just want things to make sense.

“Lawyers have always been the bearers of knowledge,” says Demetrio. “But they’ve only ever been good at talking to other lawyers. I wanted to create a company that’s about lawyers talking to people, and empowering them to run a better business.”

Case in point: Law Squared has a blog. And a podcast. Demetrio writes candidly about everything from artificial intelligence to, ‘Why lawyers need to start acting more like teachers’. It’s simple, easy to understand, and most importantly – useful. There are no stuffy leather couches or complex legal lingo here: Demetrio is all about flinging open the windows and letting in some air. This is law in a new and interactive format. As he coins it, the ‘new law’.

Far from a legal revolutionary, Demetrio actually wanted to be an international diplomat. Finishing high school, he moved straight into International Relations/ Law at LaTrobe University, spending six months in Rome as an intern at the Australian Embassy. He loved it, and applied for DFAT (Department of Foreign Affairs and Trade) as soon as he returned home. But, as fate would have it, he didn’t make it in.

“I never wanted to be a lawyer!” laughs Demetrio. “I wanted to be a diplomat. I was disheartened when I didn’t get in [to DFAT] but went on and finished my articles instead, and got a job as an insurance litigator.”

Alongside his flourishing career as a lawyer, Demetrio needed creative outlet to his work. He channeled his diplomat passions – negotiation, problem solving, personal relations – into business instead. There were six businesses in as many years, ranging from fresh food vending, removal and transport, tech – even a retreat villa in Bali.

Whilst none of them delivered the lightbulb moment he was waiting for, it did show him the inner workings of the business world. He learnt what it was the work with co-founders, how to raise capital, how to hire people, how to make money, how to lose money. It would prove to be invaluable experience.

After six years working as a solicitor and feeling disillusioned by the legal landscape of Australia, he decided that he wanted to start his own law firm – but instead of following the tired rules he was so tired of, he would run it like all of his other businesses. Modern and user friendly.

“The changes were really simple, and mostly around automating outdated systems,” says Demetrio. “From client intake forms to low end type documents, we were able to move out the admin and junior lawyer support that’s just not necessary.”

Of course, Demetrio knows that there will always be a certain demographic who are scared to move away from traditional law firms – but these people, he says, are not their target audience.

By creating a transparent business model for legal services, Demetrio is a welcome alternative for businesses requiring a lawyer. He offers two simple fee models: a membership retainer, based on a monthly fee as an in-house consultant, or a fixed fee that is offered as needed on an ad-hoc, project-based agreement. No tricky arrangements, and no hidden fees.

“Lawyers get a bad wrap,” says Demetrio. “People see them as filling their own pockets. They seem expensive, and taking advantage of an unsophisticated client base.”

This kind of ingenuity rarely comes from those who have worked in the system their whole lives. Youth, it would seem, has definitely worked in Demetrio’s favour: he is experienced enough to know what he needs to change, yet young enough to constantly be asking ‘why not?’ Still, running a corporate business – between three cities – at 30 takes enormous commitment, and has required certain personal sacrifices.

“Working for someone else, you can have a routine with everything from fitness, to food, to your social life,” explains Demetrio. “But when it’s your own business, nothing is certain…you never know what’s going to happen.”

Looking ahead, and Demetrio is set on building a lasting legacy around Law Squared. From standardising his team, systems, and processes to growing his client base, Demetrio is firm that they will always strive to beat the three pain points often associated with lawyers: that they are inefficient, bad communicators, and expensive.

Not an easy reputation to shake, but with his passion and impressive communication skills, Demetrio is well and truly on his way to reinventing what lawyers look like in 2018.