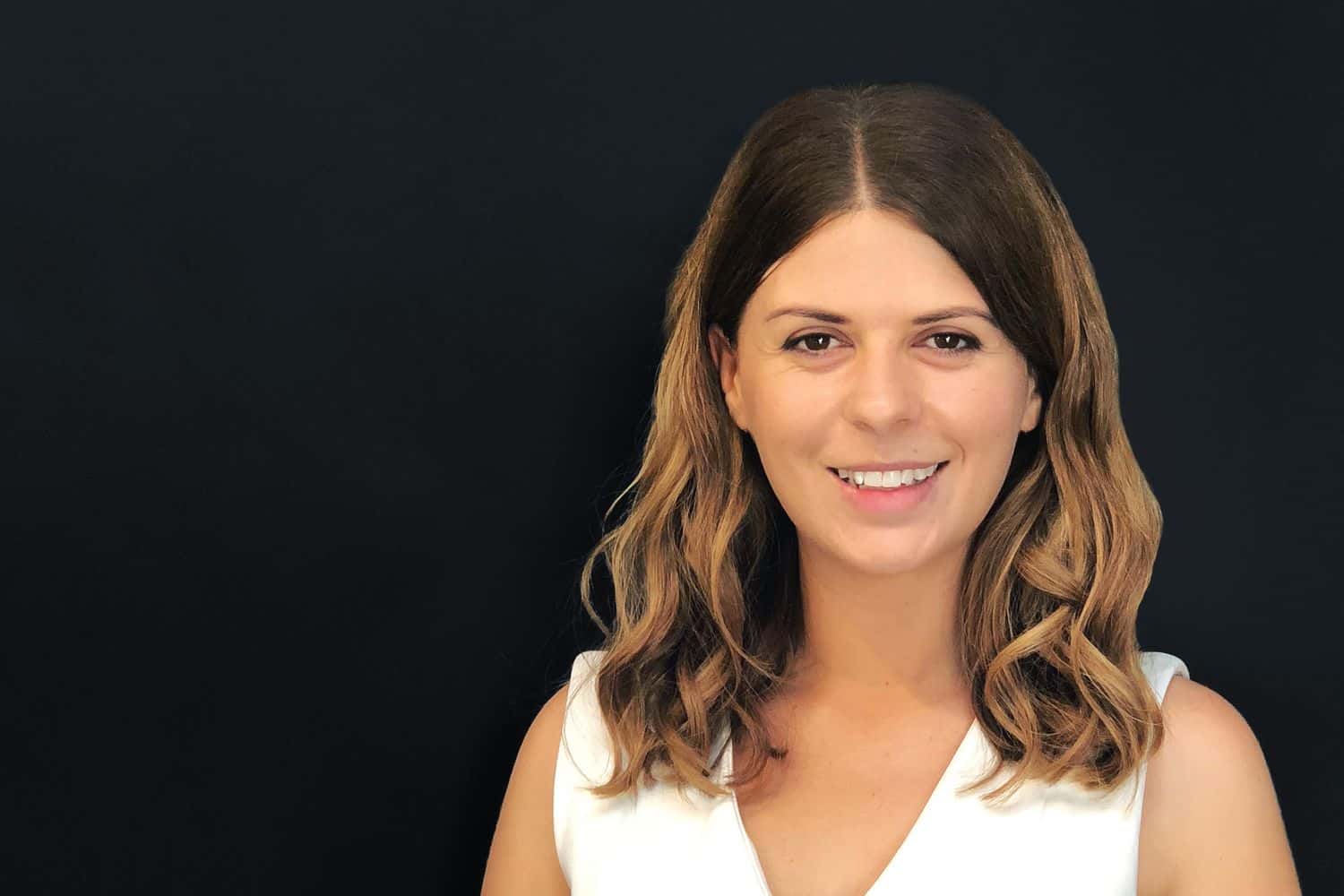 Elyse Daniels | Like most great business ideas, Exodus Wear came from a moment of exasperation. 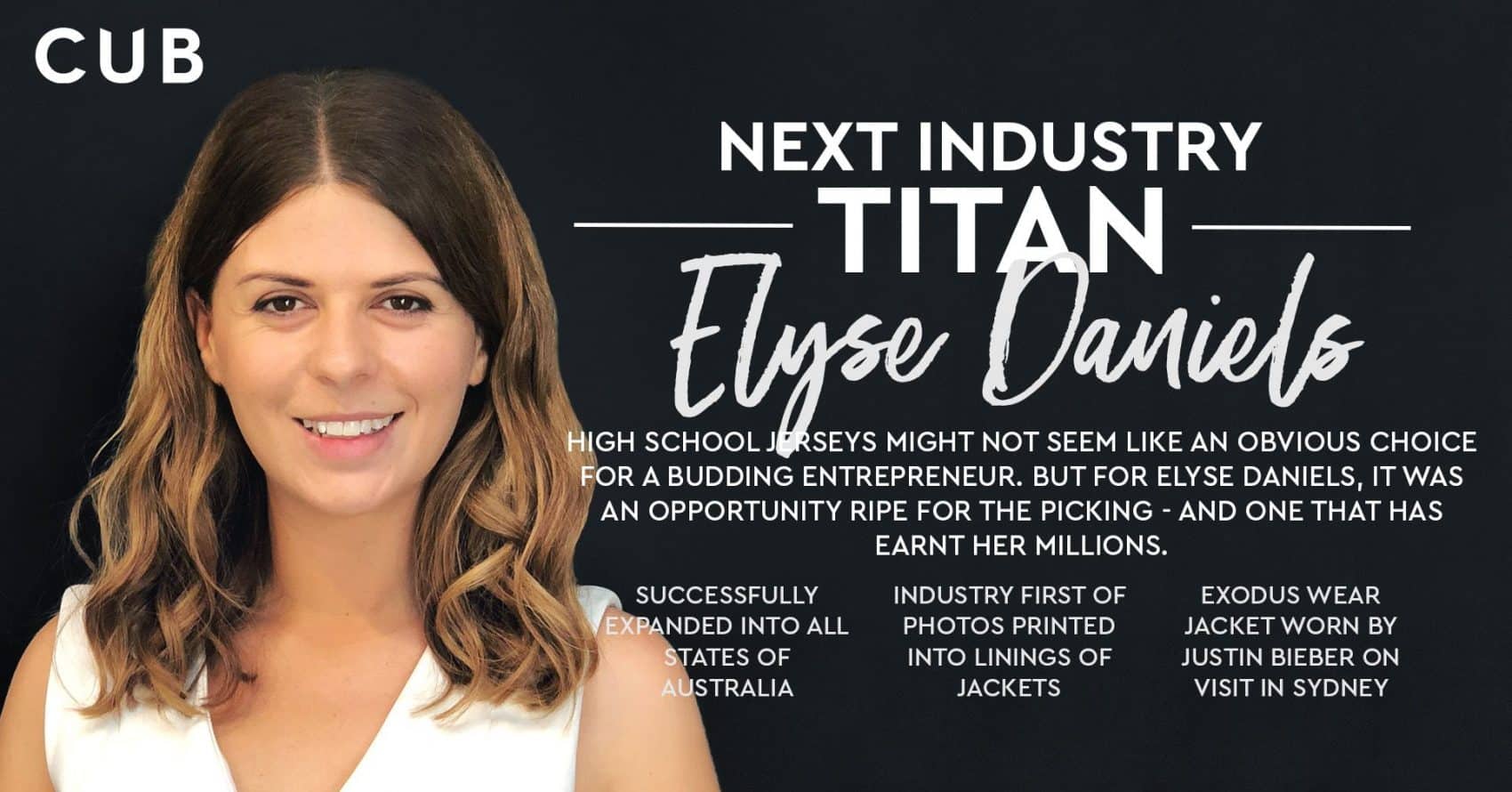 Like most great business ideas, Exodus Wear came from a moment of exasperation.

There was a kid, you see, who was graduating grade 12. Let’s call him Tom. Tom was put in charge of organising the graduation jerseys: a most momentous task. Tom’s year, like most high school students around Australia, were commemorating their graduation with jackets in the school colours that were printed with their names across the back, and the school emblem across the front. Organising their production sounds like an easy enough task, but as Tom found out – it wasn’t.

Elyse was working at the time for her parent’s business, a corporate uniform company in Sydney’s west. Tom was a relative of one of their employees, and had asked for help in the jersey project. Elyse, who was working temporarily for her Dad, asked if she could look after helping Tom.

“Oh my goodness, it was a DISASTER!” laughs Elyse. “Everything came back wrong. The sleeves were too short, the sizes were mixed up, some were missing….it took months to liaise with the factory in China and get it sorted out.”

Whilst poor Tom might have had some explaining to do with his peers, Elyse had a lightbulb moment. School jerseys, she knew, were always going to be a lucrative trade, and she had just experienced first hand how difficult the process was. She had an idea.

“I sat down and created a business plan, and presented it to Dad just like you would to any boss,” says Elyse. “I proposed that we could start working with the overseas factory to create custom school jerseys and make that part of the business. I asked to lend $6,000 to get it started.”

Elyse’s father wasn’t warming to the concept, particularly after witnessing the 6-month debacle of the previous order. But Elyse was bullheaded in her belief that this was a strong business concept, and eventually, he agreed.

Not yet 20, Elyse found herself steering her very first business project. It was a surprise even to herself, a graduate of Business & Marketing at Western Sydney University. She had far loftier goals than working in the family business – and yet, her pet project was suddenly becoming something larger.

“When I first started working with Dad, I was doing everything,” says Elyse. “I was answering phones, telemarketing, helping him interview people – basically, everything you need to do to run a small business. Dad was kind of like my Mr Miyagi. What I didn’t realise at the time was that he was training me to be an entrepreneur.”

As a result, Elyse was in a fairly rare position for people of her age – she had not only the academic knowledge of how to run a business, but also the real-world experience that’s just as crucial. With this combination of skills, she hit the ground running with her idea.

“When we started, I used the money for pretty traditional marketing – on the side of buses, that sort of thing. And I was working massive hours, calling every school I could find and arranging meetings to speak with them.”

Aware that her young age could cause suspicion with potential clients, Elyse would lie and say that she was a sales representative – in fact, she even had it printed on her business cards. Little did they know that behind the scenes she was busily coordinating overseas suppliers, monitoring orders, and liaising with her growing number of customers.

In under a year, Elyse had her system sorted and she was starting to turn a sizeable profit.

“I think I was profitable pretty much from day one,” says Elyse. “I was working with a good factory, with achievable payment terms, and we were popular because we offered something different to the competition.”

Unlike the one-size-fits-all jersey style that many of us would remember from our high-school uniforms, Elyse offered highly customised designs in a variety of styles. From bomber jackets to zip front jumpers, Elyse’s school jerseys were filling a gap in the market few others had noticed was there.

But the busier she became, the most she realised that her pet project had flourished into something much more.

“I realised that my normal job was starting to hinder my ‘side hustle’,” says Elyse. “So I decided it was time to go out on my own.”

It took Elyse two years before she departed her parent’s business completely, taking her time to ensure everything was under control. It’s this kind of personal connection that she feels extremely lucky to have experience at the start of her business career – one that taught her the value of smaller companies, and the kinship they create.

“My family were so happy and supportive of me leaving,” says Elyse, “but I had really engrained myself in their business. I had to be really honest and say, ‘I don’t have the same passion for your business as I do for my own’.”

Exodus Wear officially moved into their new premises in 2013. Whilst it was literally around the corner from her father’s warehouse, the shift was a significant one. Elyse was officially on her own to keep her business afloat.

“We had bills suddenly,” says Elyse. “Employees, rent…we were growing 40 – 50% annually. It was a real shock to the system in the early days.”

Expanding on school leavers, Exodus Wear now creates customised jackets for dance troupes, private clubs, sports teams, and even celebrities. They might not be the cheapest, but their innovative, personalised designs are priceless for the customers looking for a keepsake from a special moment in time.

In fact, Elyse is almost sentimental when it comes to pondering the importance of her product.

“I think when I started out, it was just about noticing how hard it was to create a good quality jersey for school leavers,” says Elyse. “But now I can see how important it is for them. It’s almost their first step towards becoming an adult…choosing what ‘name’ they want across the back, creating the design…it’s something they keep forever.”

I ask Elyse what name she had printed on the back on her jersey, and she lets out a raucous laugh.

“I can’t tell you! It was so lame!” she laughs. I assure her that all of us chose something silly, and to fess up.

“Future PM,” she says. “I was school captain, and had aspirations to be Australia’s first Prime Minister!”

From bright beginnings as a business-savvy 20 year old, to the founder and director of a successful Australian company, we can see where Elyse Daniels’ nickname came from. We’re just waiting to see where this innovator turns to next.