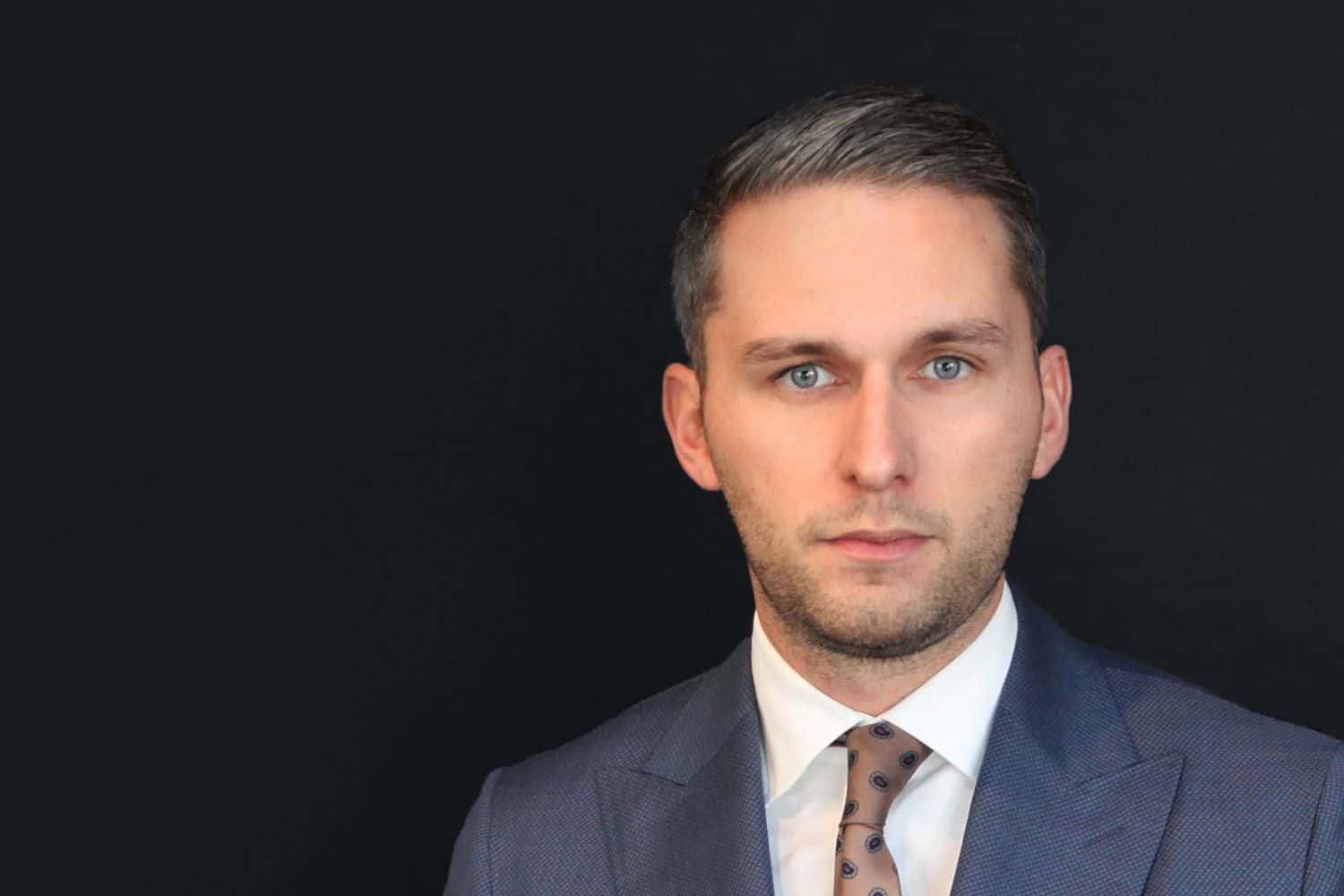 Miles Wharton unleashes his business instinct to the world of suiting – and comes out number one.

Miles Wharton unleashes his business instinct to the world of suiting – and comes out number one.

The rag trade was always a hustler’s game.

It relied on instinct, skill, intuition. An ability to see past current trends and forecast what might be needed in the future. In a modern world of department stores and online shopping, however, much of these attributes have been taken out of the fashion industry. Not for Miles Wharton – he’s bringing the hustle back to retail.

Miles is the founder and director of The Bespoke Corner, a custom suiting brand that is reinventing the system of bespoke tailoring. Their concept is simple: they’ll bring the tailor to you. Time poor executives have been quick to latch on to the highly personalised service, and The Bespoke Corner has become the go-to for luxury suiting in Sydney and Melbourne.

Miles Wharton is a fashionable man. Scanning his social media accounts, he’s always impeccably dressed: whether it’s a day on the harbour or strolling the streets of Sydney, there’s nary a hair out of place. He was named one of Australia’s Top 11 Most Fashionable Men by GQ Magazine, and is the sartorial wunderkind behind popular fashion blog, Men’s Fashion Blogger.

But beyond the smart suiting and high-fashion accolades, Miles Wharton’s real passion is for business. He loves the hustle.

“I was an entrepreneur from day one,” says Miles. “I started my first business when I was fifteen selling protein supplements to the other boys at boarding school – it actually ended up getting quite big, and then the teachers shut it down.”

A wheeler and dealer from way back when, Miles knew that his talent was for spotting a gap in the market – the problem was, he just wasn’t quite sure how to translate that into a sustainable profession. His London boarding school wasn’t exactly forthcoming in supporting his early business concepts, and so it was by pure instinct that Miles moved forward with his passion.

“I was never academic,” he says, “but I was quite good at seeing opportunity. I knew what would make money, and what wouldn’t. And I loved making money!”

From boarding school Miles graduated to Cardiff University, where he enrolled in Business Management. It was, in his words, the ‘broadest degree available for those who didn’t know what they wanted to do’. But for the entrepreneurial Miles, things just weren’t moving fast enough.

“I dropped out of uni after a year, and started an event company,” says Miles.

“After that, I left and came to Australia and started Aussie Games – importing arcade machines for bars and nightclubs. After that, I was in between PT and starting a brand called Luxe Clothing.”

In fact, it was whilst he was working as a personal trainer that Miles was struck by inspiration. He was training a client of his, the head of Goldman Sachs investment banking, when the conversation turned to the inconveniences of suit tailoring. For men looking to purchase a bespoke suit, the constant visits to the shop for fittings and re-fittings didn’t sit well with their busy schedules. If only the tailor could come to them…

And so, in the blink of an eye, Miles found himself as the founder and director of one of Australia’s most innovative new retail movements.

The Bespoke Corner has been called ‘the best personalised tailoring service in Australia’ by GQ magazine, with frequent mentions in leading men’s fashion bibles such as Forbes, Esquire, and D’Marge. They’ve collaborated with Rolls Royce and Christian Louboutin. His suits can be found in the boardrooms of Sydney and Melbourne’s top executives to high society weddings across the country. Not only did he figure out how to bring the tailor to the customer, he opened up international fashion to the relatively conservative local scene.

In just five years, The Bespoke Corner has recreated what luxury suiting looks like in Australia.

With great success often comes great risk, but Miles is pragmatic about the almost danger-free beginnings of his company. With a made-to-order, prepaid system, the discrepancies between ingoing and outgoing costs were almost non existent. And with their personalised, to your door visits, there were no rental overheads, either.

“In this industry, it wasn’t too hard to start up,” says Miles. “You didn’t really need massive amounts of capital – unlike other clothing lines where you’re purchasing a lot up front with a massive risk of not doing well.”

Miles makes it sound simple. But how does a relative newbie to the old guard of Australian fashion manage to find the suppliers, the tailors, the luxury materials? For many design companies, these contacts take decades to accrue.

“I was really lucky, I had a good circle of contacts in boarding school in London,” explains Miles.

“At boarding school, you meet people from all over the world, so as soon I decided that fashion was what I wanted to do, I reached out and said, ‘I need the best of the best’.”

From factories in China to fabric merchants in Italy, he built up a network of luxury ateliers to begin servicing his Australian client base. Miles formulated a two-tier system: the Blue Label collection, produced in Hong Kong, and the White Label collection, produced in Italy. Slowly but surely, the flair of international men’s fashion begun to gain popularity among Miles’ clientele, and he has watched with great satisfaction as the face of Australian men’s suiting has begun to shift.

“I think Australia is not really known for their fashion,” says Miles. A lot of people don’t really care too much about what they wear.”

He says that it therefore became their goal to deliver suiting that was made from the best products, at the best price – without the need to refer to the Australian suiting scene.

“We’re never looking left and right at the competition, checking out what they’re doing,” says Miles. “We’re just doing our own thing.”

Of course, there was more to The Bespoke Corner’s success than simply producing great suits. Luxury, in the current climate, is more than just clothing – it’s an experience economy. So for Miles, he knew that his customers needed to feel supported and attended to in a way that no other Australian retailer was currently achieving. This became the cornerstone for The Bespoke Corner’s market-leading approach.

“When we entered the market, we were really focusing on trying to create a service like no other,” says Miles, “as most sales assistants don’t have a clue! We wanted everyone to feel like a VIP and give them an experience where they feel comfortable and ready to experiment with their own style.”

In time, his clients begun to trust him more, and place larger orders. Miles realised that it was time to take the next step, and before long opened a bricks-and-mortar shopfront in Sydney’s Paddington.

“When people are paying $10,000 an order, they want to have the peace of mind that there’s an office space they can find you, and that’s when we launched the Paddington premises.”

They now have two stores – Sydney, and Queen Street in Melbourne’s CBD. They’ve also recently had a popup in Hong Kong, and look forward to expanding even more in the future. Looking ahead, and more luxury collaborations are on the horizon – The Bespoke Corner are looking to dabble in the art scene, creating a hand-painted graffiti dinner jacket to be auctioned off at a black tie event.

Miles Wharton is a true businessman. You get the feeling that his sharp business instincts could have taken him into any industry, his eagle eye for untapped opportunities conjuring up a variety of concepts.

“I’ve always loved fashion from when I was a kid,” says Miles, “but I never really thought I would end up in fashion – I just had an interest in it.”

From the sartorially challenged men of Australia, Miles – we’re sure glad you did.