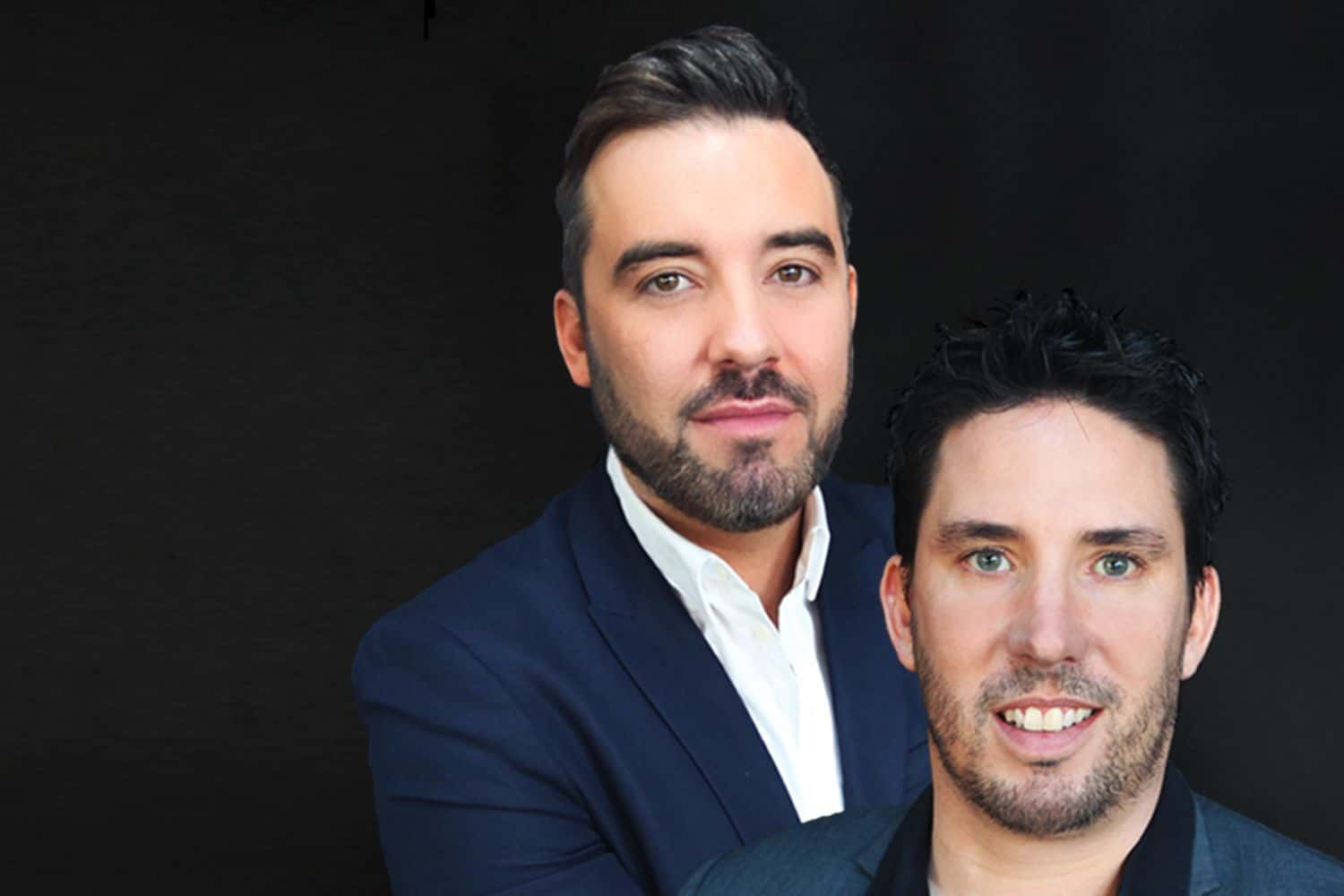 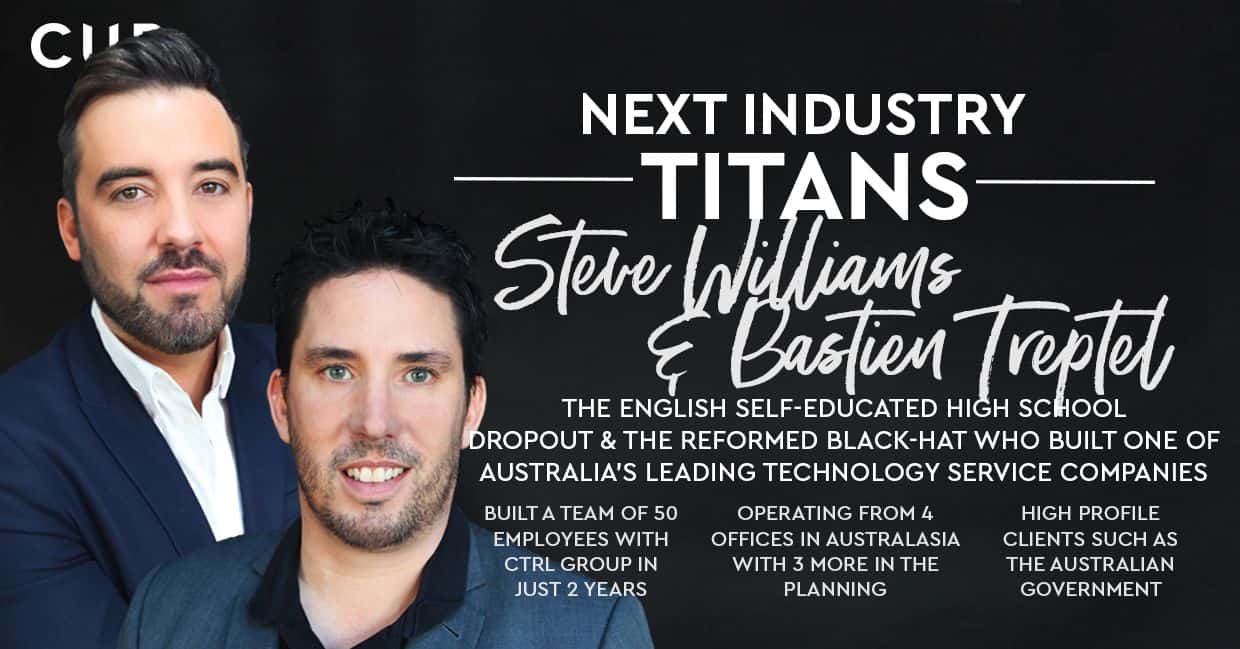 If you think about how much personal information you’ve shared using some form of technology in the last week, let alone the last year, you start to realize just how much of your life is at the mercy hackers. With so much at stake, you wouldn’t think that a high school drop-out and a teenage hacker would grow into adulthood and work together to build one of Australia’s top online security companies.

And yet, When Steve Williams and Bastien Treptel met, that’s when CTRL Security Services grew into the tech security magnate that it’s fast becoming known as.
Williams grew up in East London, and at the tender age of 15 had made the executive decision that school was not for him. “I just feel the whole system was a bit backwards in terms of life skills and guiding us with career direction and ambition.”. Three years later and in a back room of his parents home, Steve started his first business, a construction materials company (that is still flourishing today). Two years after that, Steve’s business had multiple locations and he was awarded the ‘Young Entrepreneur of the Year Award by the Royal Bank of Scotland’. At just 20 years of age, it was pretty evident that Steve’s decision to sack off school wasn’t made in vain.

In stark contrast and across the other side of the world, Bastien Treptel was leading a mischievous teenage life in small-town Merimbula – riding motorbikes and burning hay to keep entertained. When he wasn’t raising misdemeanor havoc outside, Treptel was running amok inside with a computer that his Grandfather gave him at the age of 12. His natural gift for tech was somewhat misplaced, as he put it into practice by ‘borrowing’ credit card numbers and even tapping into local bank’s online systems, but when a close family friend was grossly affected by a hacking event, his mind ticked over to how he could switch from being apart of the problem to being the solution.

He may not have had the same blind teenage ambition as Williams, but in 2009, Treptel took the leap from a comfortable (but seemingly boring) job and a six-figure salary, and branched out on his own. CTRL security was born, and for the seven years, it grew at a solid rate. Two years ago, Treptel and Williams were introduced to each other by a mutual friend, and since then, CTRL has catapulted to be one of Australia’s leading Technology Services businesses.

“By the time myself and Bastien met my business portfolio of starting, buying, investing and on-selling companies was well in to the double figures. I had recently moved to Australia and was looking for new opportunities to further tailor my already mastered craft.”, remembers Williams. ”After Bastien and I first met, we both knew that we were a good contact for one another to keep close as on the surface we looked to be the perfect fit. My first impression of Bastien; here’s this whizz kid, with unbelievable, Zuckerberg-like intelligence, but he’s also an exceptional communicator with a great sense of humor.”

Treptel was looking for a way to take CTRL to the next level, and Williams was it.

“I could back myself with the client relations and tech-side of things, but I’d always struggled on the business front. Steve had a great record of investing in companies and seeing phenomenal success. To have achieved what he had at his age, and the fact that we hit it off so well, I sort of knew that this was a guy I needed to partner with.”

Under the guidance of their partnership, CTRL now covers a variety of services instead of just one, they’ve outgrown offices and team sizes, and from the turn of this financial year, each month has been a record turnover on the last.

The team at CTRL knows who they are, what they do, and they’ve created a methodology that is exclusive to them. If there was ever a doubt that Williams and Treptel were heading off the beaten track, a meeting with AON (the world’s largest insurance broker) squashed it.

“We met with AON, and within 90 seconds of Bastien and I’s pitch the meeting was brought an abrupt end, and to our delight we were told that our approach to information security was like no other within Australia they had considered partnering with – and with that, we were signed”

For Treptel, the realization that things had really kicked up a gear was when they started bagging clients such as The Australian Government and BHP Billiton, and they did it all “with zero investment, completely organically.”

You’d be forgiven for thinking that after seeing the kind of results that most businesses dream of, that these two might be happy with where they are. In the Tech World though? Not a chance.

Williams and Treptel share money-can’t-buy expertise and experience between them, but the incessant changing face of technology and the risks associated with it means that they’re constantly researching and training in order to keep up with technology. Both Treptel and Williams admit that it’s “terrifying” how at risk the population is without even knowing it, so it’s reassuring to know that these are two blokes who aren’t just in the business for their brand, but about educating the global population – a how-to in ‘Expose. Control. Protect.’

With 50 people in their team, four offices in Australasia and plans for three more in the Northern Hemisphere soon, we’ll take a lesson from the self-educated high school dropout and the reformed black-hat any day of the week.