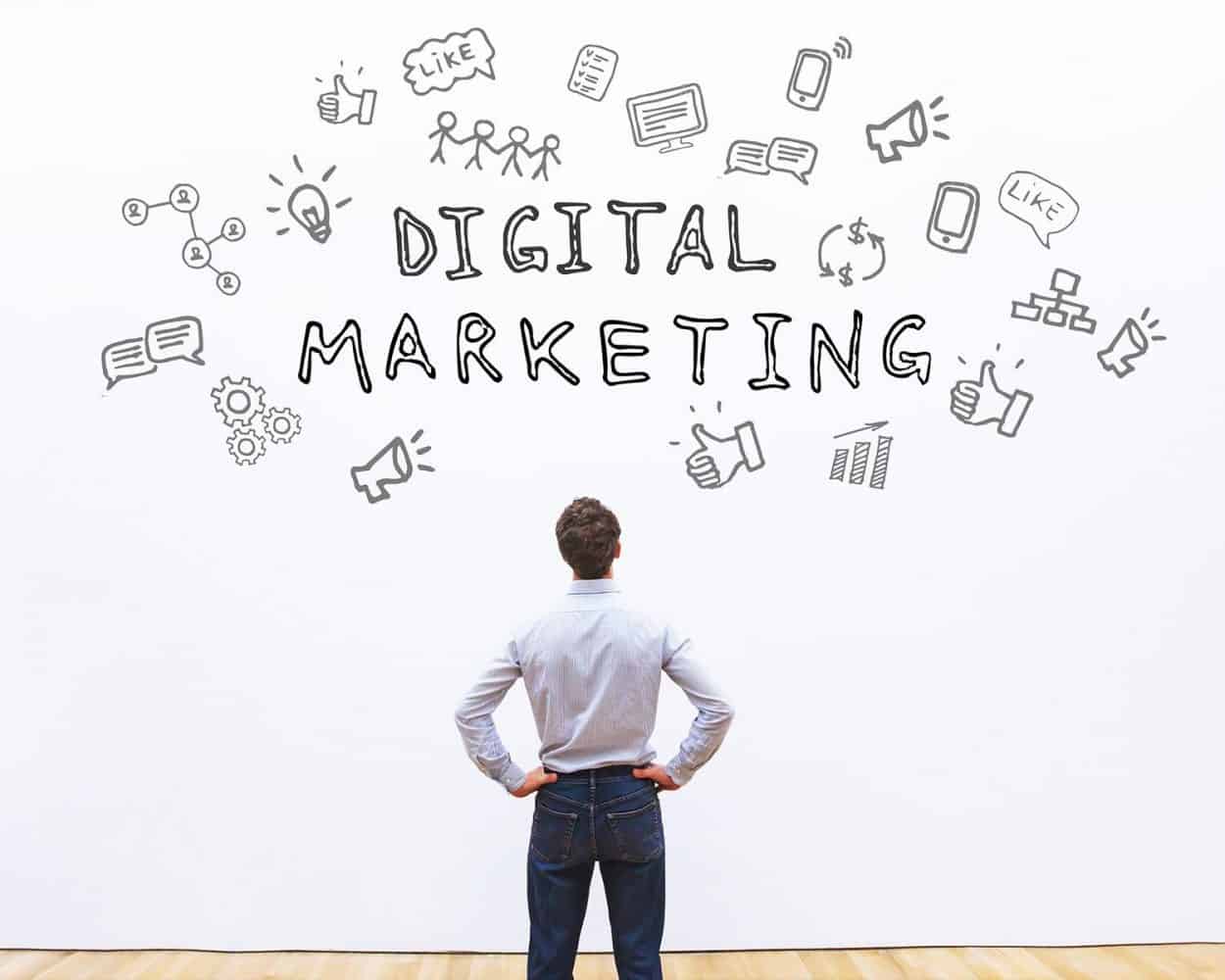 Your digital marketing strategy must evolve constantly if you’re to stay ahead of the pack. Industry experts, including Neil Patel and Rand Fishkin, highlight some key trends to watch out for.

About 20 years ago, digital marketing was little more than spamming pages with keywords. Search engine algorithms were so primitive that you’d usually get ranked just by gaming the system a little.

Search has come a long way since then.

The likes of Google keep very close tabs on what you’re doing to your website. If you’re building bad links, you’re likely to get punished. If you’re loading your website with bad content, it’s not getting ranked.

The point is that digital marketing evolves on a near-constant basis. Your job is to keep up with the trends to ensure your site doesn’t fall behind the times.

Failure to do so means your competitors will fly past you in search rankings. That means they get more traffic and more sales while all of your numbers fall.

That raises a key question:

What digital marketing trends do you need to know about for 2019?

This is what the industry’s leading experts have to say.

When you think about digital marketing, Neil Patel is one of the first names that come to mind. He’s built a powerful personal brand on the back of his in-depth expertise in the industry. From paid search to content marketing, his is one of the most respected voices in search.

He’s also the co-founder of several major digital marketing companies. These include the likes of Crazy Egg and Kissmetrics.

Patel says that you may have to change a lot about your digital strategy in 2019.

“If you think about SEO and where it’s heading, whether you guys like it or not, it’s voice search,” says Patel.

“It’s not just SEO. It’s the world. You look at Alexa from Amazon. Everyone is starting to use <it>. If you think about it, search is changing.”

It’s not just Alexa either. Siri has been around for years and pretty much every smartphone has some sort of voice search feature.

But it’s the rise of smart home devices like Alexa that are the real game changers.

This means that the content you’re presenting to people will have to change too. This all ties into the idea behind semantic search.

With semantic search, devices like Alexa and search engines in general try to figure out the meaning behind your question. That’s far beyond picking results based on keywords. So, if you ask “what is content marketing?”, a search platform will aim to provide an answer based on the meaning behind the question.

Voice search is the next step for semantic search. That means you’re going to have to structure your content so that it’s delivering based on the ideas behind semantic search.

Here’s what it boils down to. Google processes about 3.5 billion searches every day. Of those, 30% come from voice search. That number’s only going to grow throughout 2019.

Mollie Powles – A Shift Away from Traditional Online Advertising

Browser Media is an inbound marketing firm based in the United Kingdom. Mollie Powles serves as the company’s head of marketing and PR.

She says that traditional digital advertising techniques will change during the course of 2019.

“With the increased use of ad-blocking technology, we’re going to see more brands move away from traditional advert formats such as pop-up banners and automatic videos,” she says.

She adds that they’ll “…Shift towards native advertising techniques that do not disrupt the user experience.”

You need only look to Facebook for the perfect example of native ads. Whenever you see an ad while you’re scrolling through your news feed, that’s a native ad. These contrast against the other ads that you see on the side of the page.

The point with native ads is that you’re not intruding on whatever the user is doing at that moment. With the Facebook example, the user can just scroll right past the ad if they’re not interested. Or, they can stop scrolling and explore the offer further.

The key is that Facebook isn’t delivering something that worsens the experience of using the platform.

Mollie’s point about avoiding pop-up ads is also important. The use of ad-blocking software rose by 30% in 2017 alone. It’s continued to rise in 2018 as people strive to avoid intrusive ads.

That means you’re wasting money on these types of ads.

In 2019, you should aim to invest more of your digital marketing budget into ad platforms that use native techniques. These include the likes of Facebook and Google.

The CEO of MobileMonkey, Larry Kim is perhaps better known as the founder of WordStream. Digital marketers have trusted his insights for years and he’s always ahead of the curve.

He says that remarketing is going to be one of the big things in 2019, at least in terms of PPC.

Larry says he’s going to focus almost solely on remarketing “…“Because <it has> much higher CTRs and conversion rates.”

He says: “Combining these two tactics yields ROI that I haven’t seen since 2013 when ad prices were much lower.”

Remarketing is the practice of targeting certain audience segments with ads. Typically, these are people who’ve visited your website and left without making a purchase.

For example, you may have somebody who logged onto your website and put a product into their shopping basket. However, they decided to then leave the website before making the purchase.

A remarketing ad is something like an email or advert that reminds that user of the purchase they didn’t make. Some marketers take it further and use remarketing to provide personalised offers to tempt the lost customer.

With the sheer amount of data you now collect on your website’s users, remarketing is a must. The technique targets people who have a clear interest in your product. In many cases, this technique can give them the final push to make a purchase.

This is a trend that a lot of major players, like Kim, have already adopted. However, 2019 will likely see a more concentrated focus on this technique.

Rand Fishkin is the founder of Moz, which is a global authority in the digital marketing sector. He’s now one of the leading names in search and he’s a keynote speaker on the subject.

And he points out that Google’s trying to take organic traffic away from you.

You’ve likely already seen this yourself. You type a simple question into Google and you get an answer in the search results. That means you don’t have to click on the website that’s provided the answer.

Google’s giving you the answer straight away.

Fishkin notes that this trend towards in-engine answers is already leading to lower organic traffic numbers.

And he says you have to act now to maximise what you get from the organic traffic that remains.

“We need to leverage every scrap of traffic that Google and these others still send. There’s never been a better or more important time to make organic traffic acquisition a centre of your strategy.”

He goes on to recommend putting a portion of your paid search budget towards organic search.

The reason for this is so that you can position yourself for the future. While others still focus on paid search, your focus on organic puts you in a stronger position. When Google inevitably sends even less traffic to websites, you’ll at least get more of what’s left than others.

Sarah Bird is another important figure at Moz. She currently serves as the company’s CEO, which makes her voice as important as Moz founder Rand Fishkin’s.

Bird spoke at Web Summit in 2018 to specifically confront some of the trends that digital marketers can expect in 2019. In particular, she bucked the idea that Google won’t dominate search in the coming years.

She presented data to show where people are searching today.

“The data shows us that Google is king guys. It’s not even close. 90% of searches happen on Google. This includes Google Images, traditional Google. It includes YouTube,” she says.

You’ve probably read in plenty of places that Facebook and Amazon are making waves in search. And Bird’s quick to point out that they are.

However, they’re nowhere near Google in terms of pure market penetration. The same goes for the likes of Yahoo, Bing, and the other more traditional competitors that Google has. According to the data that Bird presents, neither Yahoo nor Bing break the 3% mark in terms of search volume. Amazon stands at 2.3% while Facebook is at 1.4%.

That’s not to say that such platforms shouldn’t be a part of your digital marketing strategy. However, it’s important that you don’t buy into the reports that suggest they’ll become major players in search.

Google still rules the roost and it’s going to continue to do so in 2019 and beyond.

That shouldn’t come as a surprise either. The phrase “google it” is a part of the lexicon now. Google is the first brand that comes to people’s minds when it comes to search.

The point is that you have to take care if you were thinking about dedicating more of your search budget to other platforms. At the very least, you should hold off on moving money away from Google.

Some of these trends focus on things that are happening right now. For example, the move towards voice search isn’t anything new.

However, it’s the upward trend in voice search usage that should grab your attention. Smart home devices will become more popular in 2019 and beyond. And with them, so will voice search.

The way you advertise may also have to change. Remarketing looks set to become a more important part of your digital strategy than ever before. Plus, there’s a definite switch towards native ads in place of pop-ups. The rising use of ad blockers may make more traditional online ads obsolete in the coming years.

Then, there’s the Google conundrum. Sarah Bird makes it clear that Google’s going to continue to dominate search. But Rand Fishkin notes that Google’s also sending less traffic to websites.

It’s all a lot to take in. Thankfully, CUB can help you to untangle it all and adjust your digital strategy.