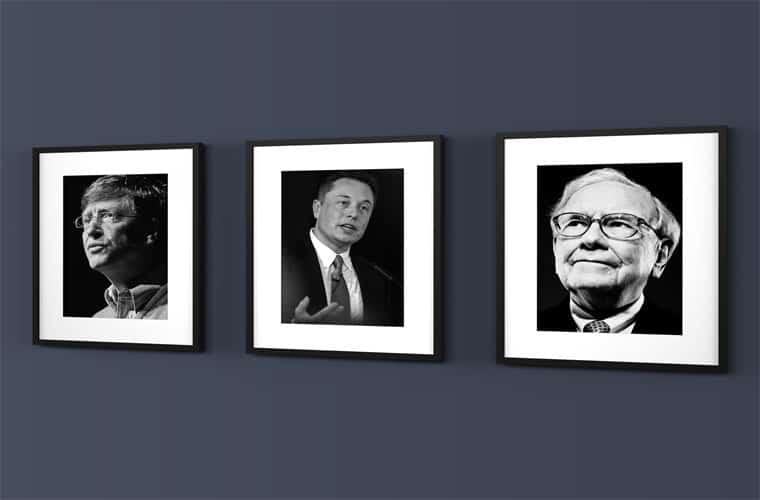 What Personality Traits Do Bill Gates, Warren Buffett and Elon Musk Have In Common?

You may have spent a lot of time thinking about the characteristics of billionaires. Perhaps you’re hoping to pick up a few billionaire habits yourself. You’re in luck. The likes of Bill Gates and Warren Buffett share several personality traits.

Every billionaire is unique. You only need to research some of the world’s most successful people to discover some weird habits of billionaires. For example, Warren Buffett spends most of his time reading, while Mark Zuckerberg has a penchant for wearing the same t-shirt every day.

However, that isn’t to say that there aren’t certain common characteristics of billionaires. In fact, it’s remarkable to see how many personality traits billionaires actually share.

Here are some of the key characteristics of billionaires that you must take inspiration from.

Marriage is something that the majority of people on the Forbes’ Billionaires List have in common. In fact, it seems that a healthy family life is one of the most common characteristics of billionaires.

Just look at Bill and Melinda Gates. They’ve shared over 20 years of their lives, and they seem to enjoy working together just as much as they enjoy their relationship. Warren Buffett’s marriage lasted for over half a century before his wife sadly passed away. Furthermore Eric Schmidt of Google has a 30+ year marriage under his belt.

Family isn’t just a secret for success. It is also the key to happiness when it feels like the weight of the world is on your shoulders. As Gates himself says: “I measure my happiness by whether people close to me are happy and love me, & by the difference I make for others.”

Of course, that isn’t to say that marriage to a billionaire doesn’t have its difficulties. Elon Musk’s ex-wife Justine has spoken about how the unique minds of billionaires aren’t always conducive to relationships.

Even so, it seems as though having a desire for a family is a trait that many billionaires share.

Here’s some encouragement for those who are trying to amass wealth – you’re not alone. In fact, only 29% of the world’s billionaires inherited their wealth.

Contrast that with the 57% who earned it themselves and you can see a definite trend.

So what does this mean? Well, anybody who has built themselves up to billionaire status must have a superior work ethic. However, hard work isn’t all it takes. Self-sacrifice plays a part, as Richard Branson points out when talking about starting a business.

“In a company’s first year, your goal should be simply to survive, and this will likely take everything you’ve got,” he says.“No matter how tired or afraid you are, you have to figure out how to keep going.”

You can’t make something great without putting a lot of yourself into it. Self-made billionaires sacrifice a lot early on in their lives to enjoy the successes they have later on.

Billionaires have an average age of 63, which suggests that it takes a lot of patience to amass such vast amounts of wealth. Furthermore, only 10% of billionaires fall below the age of 45, so there’s still time yet if you’re in your 30s. In fact, many billionaires believe that patience plays a crucial role in success.

As Elon Musk says: “Patience is a virtue, and I’m learning patience.”

So, we can take a couple of things away from this. Most billionaires have to wait before they achieve their status. However, those who innovate in the technology sector seem to enjoy a faster track to riches. As time goes on, you may see more people become billionaires at a younger age, especially as technology takes a firmer grip on the world. But for now, patience truly is a virtue for the billionaire.

Jeff Bezos and Larry Ellison – A Desire to Innovate

Without innovation, we would go nowhere as a species. It should come as no surprise that some of the world’s most successful people have innovated constantly during their lives.

Take Amazon CEO Jeff Bezos as an example. He keeps it simple when he says: “There’s no bad time to innovate.”

Oracle Corporation co-founder Larry Ellison expands on this. “When you innovate, you’ve got to be prepared for everyone telling you you’re nuts,” he says.

Billionaires universally want to create spectacular things. However, Ellison shows us just how much resistance billionaires face in doing so. However, their desire is so strong that they can break through any barriers in their way to improve on how things are currently done.

Many billionaires understand that they would not be in the positions that they’re in today were it not for the contributions of other people. This appears to ignite a charitable fire in many billionaires.

Take Warren Buffett and Bill Gates as examples. They founded the Giving Pledge, which calls on all billionaires to give away at least half of their wealth.

“We make the future sustainable when we invest in the poor, not when we insist on their suffering,” says Gates.

Michael Bloomberg, who runs the Bloomberg media empire, is also an exceptionally charitable person. He has donated over $4.3 billion during his lifetime.

The point is that billionaires know how they got to the dance. Without the hard work of others they couldn’t possibly attain success. Remember that others matter and you’ll share a common billionaire trait with Gates, Buffett, and Bloomberg.

Billionaires are unique people, so it’s almost impossible to sum them up into a set of characteristics.

However, there are some common characteristics of billionaires. The above are just a few examples. If you adopt these traits in your own life, perhaps you will set yourself up for similar success later on down the line.